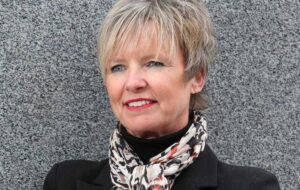 Judith Gillespie served as a police officer in Northern Ireland for 32 years, making history by becoming the first woman in RUC/PSNI to become an Assistant Chief Constable in 2004. As a Chief Officer for 11 years, she helped steer the organisation through significant change, including leading on the PSNI’s Gender Action Plan.

She became Deputy Chief Constable in June 2009, at the same time chairing the 2013 World Police and Fire Games Company Board and is very proud that Belfast delivered “the friendliest and best Games ever”.

On leaving PSNI in March 2014 she became an independent leadership advisor. She has presented and contributed to TV documentaries on sensitive issues including domestic abuse. She served for four years on the Equality Commission for Northern Ireland, for five years on the Garda Policing Authority, and is currently a member of the Probation Board for Northern Ireland and the Prison Service Pay Review Body. She chairs the Interdepartmental Working Group on Mother and Baby Homes, Magdalene Laundries and Historical Clerical Child Abuse, and chairs the Careers Advisory Forum which advises Ministers on the careers strategy for Northern Ireland.