Bank of Ireland UK steps up to support Alzheimer’s Society 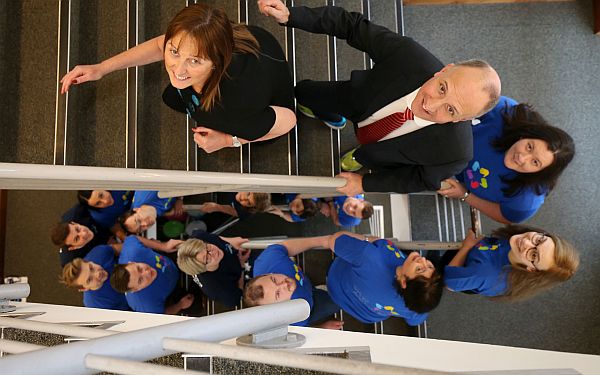 Friday 15th December 2017: Bank of Ireland UK staff today stepped up their fundraising efforts to support flagship charity partner, Alzheimer’s Society, as they took part in a 22,000 step challenge to raise money and awareness of the 22,000 people living with dementia in Northern Ireland.

The new two-year partnership, which began in March this year, has already seen the bank in Northern Ireland donate £50,000 of vital funding, which will help Alzheimer’s deliver services such as the Side by Side programme, which pairs people living with dementia with local volunteers, so they can keep doing the things they love.  At a cost of £1,040 a week, a local Side by Side service enables volunteers to support people with dementia to do whatever they enjoy, from going to a football match to visiting a café for lunch, so the money raised by Bank of Ireland already could fund one Side by Side service for seven months.

In addition to fundraising, the Bank has created a web-based training tool with Alzheimer’s Society and Accenture to increase employee awareness of the challenges faced by those fighting the condition. Bank of Ireland UK, by the summer 2018, has committed to recruiting at least 400 Dementia Friends in its Northern Ireland business who will learn more about the condition to help change people’s perceptions of dementia.

“Today’s step challenge and Christmas Community Day events show that we are wholeheartedly embracing Alzheimer’s Society as our charity partner. So many lives are impacted both directly and indirectly by this condition and through the partnership we will continue to raise funds and will work towards becoming a more dementia friendly business.”

“We are so grateful to Bank of Ireland UK for the ongoing support and for their efforts so far. It is really important that we establish partnerships like this to Unite Against Dementia, raising awareness and understanding as well as vital funds to forge our work forward to improve the quality of life for people affected by dementia.”

We are fast approaching 22,000 people living with dementia in Northern Ireland, so the bank will continue to highlight the devastating effects of the condition and help those most affected through a wide-ranging programme of activities across the counties.