Budding chefs wanted for the Big School Cook Off 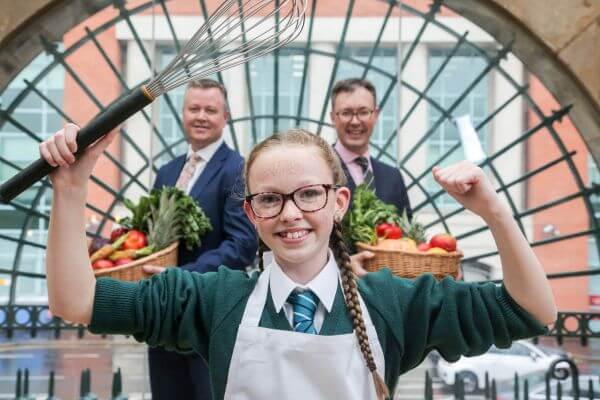 The second annual Mount Charles Big School Cook Off in association with the Irish News has been launched, with entries now open for pupils between the ages of 11-14 years old across Northern Ireland and Donegal.

Supported by Business in the Community, the Big School Cook Off aims to inspire young people to take an interest in cooking fresh, healthy meals based on budget-friendly, locally sourced ingredients.

The first stage of the competition invites pupils in teams of two to create a recipe for a main course that will feed two people on a total budget of £5, with an entry deadline of 27th October.

The judging panel will shortlist the recipes and the successful teams will take part in a regional heat in January 2018 against other schools, where they will cook the recipe they entered.

The regional finalists will be judged on the day, with the winning team from each county going forward to cook their recipe once again at the grand final in March 2018 for their chance to be crowned the Mount Charles & Irish News Big School Cook Off Champions!

Cathal Geoghegan, Managing Director of Mount Charles said: “Our first Big School Cook Off was a huge success, with an incredible standard of culinary talent right across Northern Ireland and into Donegal.

“We were thrilled with the volume of entries, which only made the winning team from St Mary’s College in Derry’s achievement all the more special.

“The feedback from participating schools was tremendous, with teachers stating that the competition allowed pupils to gain confidence in their cooking ability and gave them a greater interest in cookery in general; as well as an opportunity to enhance their team-working and time management skills.

“It’s also an opportunity for us to check out the talent of the future as there are always jobs and skills gaps in the hospitality industry. The Big School Cook Off is a way to encourage young people to consider a career in foodservice down the line.

“All that remains is for me to wish all entrants good luck; ready, steady, cook!” he added.

Irish News marketing manager John Brolly described it as an excellent initiative by Mount Charles to get young people to take an interest in food.

“We are looking for school pupils to slice, dice and cook their way through a number of challenges so that they can walk away as winner of the Big School Cook Off.

“The standard last year was amazing but the important aspect is the children had great fun taking part,” he said.

The final entry deadline is 10th November, however teachers who enter their team(s) before the early bird deadline of 11th October will be entered into a prize draw for a £50 shopping voucher.

Each county winning team will receive £200 for their school and a masterclass in cookery from Mount Charles Group Development Chef, Simon Toye, previously Executive Chef at the Michelin-starred Deanes restaurant in Belfast.

The overall winning team at the grand final will win £300 for their school as well as a treat for their family, with a meal at the award winning George’s of The Market restaurant and family tickets to see the Belfast Giants ice hockey team at the SSE Arena.

To enter or for more information visit www.irishnews.com/bigschoolcookoff

CEO Breakfast Forum: Who has responsibility for leading Northern Ireland?