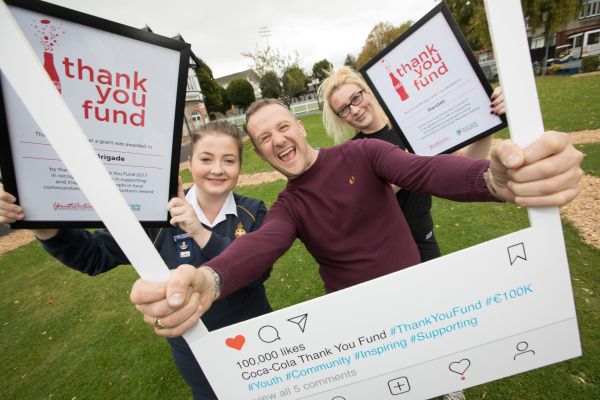 Belfast, 12th October, 2017: The Coca-Cola Thank You Fund today announced details of this year’s award recipients- eight of which are from Northern Ireland.

The successful non-profit organisations were presented with their certificates during a celebration at Zeminar, Ireland’s largest youth conference. A total of €100,000 has been awarded to 14 community groups in Northern Ireland and Republic of Ireland to support a number of innovative projects which will support and inspire young people.

The 14 winning groups have been awarded with grants of either €10,000 or €5,000 and Antrim based organisation, the Girl’s Brigade, are set to receive one of the €10,000 grants. The money donated to them by the Coca-Cola Thank You Fund will be used to aid their new project which the opportunity to train as leaders in developing a positive mental health programme and share these learning with the wider population of the Brigade.

Pete Snodden, Thank You Fund Ambassador, said “I’ve loved being part of the Thank You Fund and getting to hear about all the fantastic youth groups and projects that will benefit from the fund. I’m so impressed by how forward thinking these projects are and can see the real impact they can bring. I wish them every success as they set out to achieve their goals.”

Matthieu Seguin, General Manager, Coca-Cola Hellenic Ireland and Northern Ireland thanked all the organisations who applied for Thank You Fund grants this year and the judges who helped select the winners.

“We are delighted to invest in young people in our communities but it is important to us that the funding provided through the Thank You Fund is a catalyst for new thinking and helps support the delivery of projects and schemes that otherwise might not happen. It is clear from the strategic approach and new thinking that we have seen in the proposals that a lot of time and effort was invested in this process by those who participated. I would like to thank everyone who took the time to enter and specifically to congratulate those who were successful. It is important that the next generation of our society are given every possible opportunity to reach their full potential and we hope that the funding provided through the Thank You Fund will make a difference in the lives of those who have the opportunity to participate in the programmes.

“I would also like to sincerely thank our judges who gave freely of their time and expertise to select the worthy winners.”

The Coca-Cola Thank You Fund is delivered in partnership with YouthAction Northern Ireland and the Irish Youth Foundation.

“The best way to reach young people and help them acquire skills that they will use throughout their lives is by getting them involved with groups that serve their passions. There is no such thing as one size fits all, and the projects funded by the Coca-Cola Thank You Fund will appeal to a broad cross section of young people. All are designed to make a strategic and impactful intervention in their lives and our communities stand to benefit as participants go on to set a positive example among their peer group,” she said.

At the outset of the process this year, Coca-Cola commissioned research to establish the ambitions and concerns of parents of young people. The number one aspiration of parents for their child is that they create a life they enjoy and derive personal satisfaction from. Nearly two thirds of respondents said they worry about their child being led astray by their peer groups. The issues that parents worry about most are drug addiction (21%) and societal challenges such as employment (15%).

By investing in community groups that specifically target youth, Coca-Cola is aiming to support those who provide targeted interventions for young people, helping to keep them interested in certain activities or providing supports and networks that help them to make the right decisions as they move from teenage years to young adulthood.

Since the Thank You Fund was launched in 2011 it has invested a total of €855k in community groups and non-profit organisations throughout the island of Ireland.

More information about the Coca-Cola Thank You Fund is available at www.coca-cola.ie/thank-you-fund

Budding chefs wanted for the Big School Cook Off