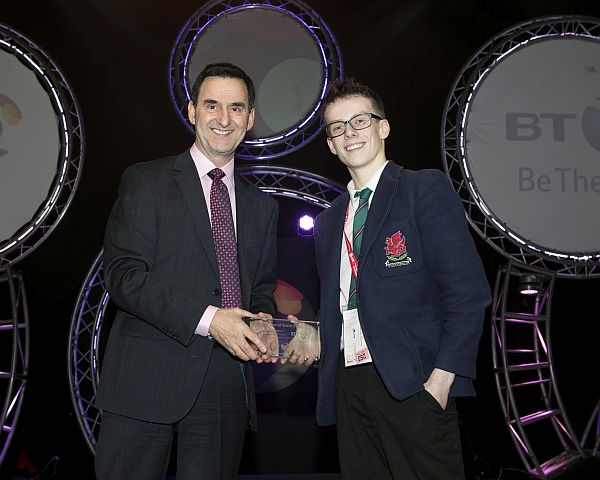 Belfast, Monday 15th January 2018: The winner of the 54th BT Young Scientist & Technology Exhibition (BTYSTE) has been announced. Simon Meehan, aged 15, a Transition Year student from Coláiste Choilm in Cork, has taken home the top prize for his project entitled ‘Investigation into the Antimicrobial effects of both aerial and root parts of selected plants against Staphylococcus’ aureus.

Simon’s award includes the largest prize fund yet of €7,500, the BTYSTE perpetual trophy and an exclusive trip to Bletchley Park in the UK, the infamous World War II coding centre. In addition, and uniquely this year, the winner will have the opportunity to represent Ireland at the European Union Contest for Young Scientists, taking place in the RDS, Dublin in September 2018. This will be only the second time in the 30-year history of the competition that Ireland will host this prominent international event.

Northern Ireland students, who last week showcased their projects at the prestigious event, were also formally recognised at the awards ceremony.

Further awards were presented to Northern Ireland schools at the ceremony:

The following schools were also highly commended at the Exhibition:

Peter Morris, Head of Service Delivery NI Networks at BT said, “This year’s Exhibition has exceeded all expectations showcasing projects and innovations which are now, more than ever, pivotal for the future of our society. Our theme for this year’s exhibition is ‘It Starts Here’ – but this is only the beginning and it is vitally important that every student’s voyage of discovery does not end here. I want to congratulate every student that entered, and Simon, our overall winner. Simon’s innovative skills and entrepreneurial approach are critical to research and development led companies like BT”.

Department of Education, Permanent Secretary, Derek Baker said: “The BT Young Scientist & Technology Exhibition provides a wonderful opportunity for young people to showcase their talents across a range of STEM subject areas while competing at the highest possible level.  It allows participants to collaborate with their peers to demonstrate creativity, problem solving and team working skills, all key skills which are highly sought after by employers. I would therefore like to congratulate all the students from Northern Ireland who have taken part this year and to acknowledge the hard work and innovation that they have all put into their projects. It is also important that I acknowledge the support of the teachers and schools in helping the students bring their projects to life. Everyone involved should be very proud of their endeavours and of the very high standard of projects on view here today.”

This year an impressive 2,031 projects from 4,251 students across the island of Ireland were entered including 21 projects from schools in Northern Ireland.

The BT Young Scientist & Technology Exhibition continues tomorrow, Saturday 13th January, and is open to the public from 09:30 a.m. – 17:30 p.m. Make sure to book your tickets online in advance at www.btyoungscientist.com/ticketing to avoid disappointment as both Thursday and Friday of the Exhibition totally sold out. Visitors can look forward to a packed event once again tomorrow with 22 shows which include the Ministry of Science, World of Robots and a Journey Through Space and Time.

Celebrating the coders of the future