This year the trophies for organisations that achieved Platinum in the 2017 NI Environmental Benchmarking Survey were made by a local supplier, David Keys Sustainable Woodworking. David also made the trophy for the George Dawson Award. 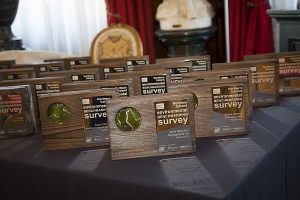 David runs what he calls an ‘Unplugged’ workshop, where he uses “old-school” hand tools wherever possible, to reduce energy consumption. Most of the tools he uses date back to before the Second World War, and he has restored them back to their original condition.

Our Survey trophies were made from reclaimed wood made out of floorboards that were being thrown out during a house restoration in Kesh, and an old hemlock beam from a house in Cullybackey. David drilled all of the holes with a 90-year old Mancuna hand cracked pillar drill from the 1920’s – it took him approximately sixteen and a half thousand turns of the handle to produce the awards. The glass inlays were made out of five recycled wine bottles, making them truly circular.

Danske Bank puts wellbeing at the top of its agenda