Fermanagh & Omagh District Council (FODC) was established in 2015 as a result of the Local Government Reform Programme. 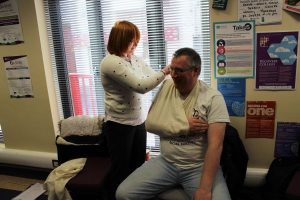 What Fermanagh & Omagh District Council did

The Fermanagh & Omagh District Council area is home to six wards which, at the time of application, were ranked in the upper quartile of disadvantage. Almost half (43.23%) of those living in the Fermanagh & Omagh District Council area have no or low qualifications; 4.8% are unemployed, of these 47.09% are long-term unemployed, 34.05% of the population are economically inactive with 20.75% recorded as having a long-term health problem or disability limiting day-to-day activities.

ASPIRE is an employability programme with the primary aim of moving people currently unemployed or economically inactive into paid and sustained employment. It started in April 2015 and will run for three years. ASPIRE offers each participant an individualised programme ranging from a few weeks to 12 months, dependent on need.