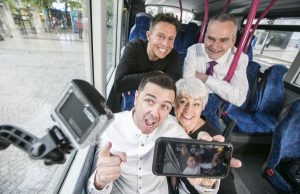 In 2015, Translink conducted research to identify barriers to public transport usage; none was greater than Northern Ireland’s love affair with the car.

The company identified the European Tapestry Project ‘Seven Stages of Change’ model as a framework for delivering change by:

1. Driving awareness of the issues caused by using the car
2. Promoting personal responsibility
3. Educating on alternative options
4. Influencing perception of other travel options

With the objectives of driving:

Translink devised Northern Ireland’s first ever Bus and Train Week (BTW) 6-12 June 2016 to celebrate all that is great about public transport. It focused on six key themes to demonstrate how it makes the economy stronger, supports education, tourism, environmental responsibility and health and active travel while building a more inclusive society.

The company also focused on the personal benefits of public transport – less stress, more time and value for money – and devised one simple call to action for all audiences, #GetOnBoardNI, to encourage more people to try/advocate for public transport.

The delivery of the strategy was supported by a TV, radio, print and online advertising campaign promoting discounted fares and special offers throughout BTW.

It sought buy-in from key stakeholders to actively advocate for public transport; CEOs/Directors from 20+ relevant organisations publicly affirmed their support for BTW and senior representatives from all eleven NI local Councils encouraged their constituents to get on-board. Over one third of MLAs, including three ministers, publically declared support and got on board.

An extensive Internal Communications programme encouraged 3,800 Translink employees to engage with local groups, schools and businesses, to showcase local talent and enterprise in stations throughout Northern Ireland. The company negotiated partner offers from restaurants, retailers/entertainment venues across NI for passengers.

Around 350 events were held throughout the week in thirty stations across NI.

Early indications suggest that BTW has been a huge success – during the following five weeks, there have been an additional 140,000 passenger journeys across all services.