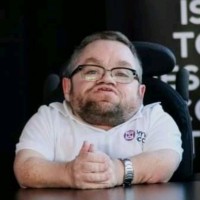 My name is Dermot and I set up My Way Access back in 2009. It grew out of frustration of not being able to get answers to my questions and not be able to access premises, due to their poor accessibility.

Rather than getting angry, I wanted to do something positive and create a disability awareness movement. My Way Access was born.

I have a rare disease called Mucopolysaccharides Morquio. Long story short, I am short and I use a wheelchair. It is a part of who I am, but it does not define who I am. I am disabled and proud, I am Dermot.

in 2020, I was awarded the Bravery Award from Amnesty International UK in recognition of the human rights campaigning I do for disabled people.

I have been working at Omagh Enterprise since 2002, where I began as an Administrations Officer to their Social Media Project Officer.

In my spare time, there is nothing more I enjoy more than hanging out with my family and friends. Whether that is going to the cinema, heading out for a bite to eat or a quick drink in the pub.

One of the two biggest joys in my life is live stand up comedy, where you can often see me in the audience of the famous Daly’s Comedy Club in Omagh. Nothing beats a good laugh and this is the best stage to showcase the best of Irish comedy and big international names.

The other big joy is cosplay. I just love attending Comic Cons in Belfast and Dublin, as well as Comic Fests in Enniskillen and Omagh, dressed as my favourite comic book and films characters. Interacting with people is very liberating and it brings the social awkwardness some non-disabled people have, for a few hours.

In the quiet times, I have a shoes kicked off, watching Netflix with my trusty dog Mirta. She is my mini-shadow and is always with me.
On leaving PSNI in March 2014 she became an independent leadership advisor, served for four years as a member of the Equality Commission for Northern Ireland, and was appointed to the Probation Board for Northern Ireland, and most recently to the Garda Policing Authority in Dublin in 2016. She chairs the Careers Advisory Forum, is a Visiting Professor at Ulster University, is an assessor for Diversity Mark Northern Ireland, and works on a voluntary basis for the Marie Curie charity.