Join the COP26 Zero Carbon Battle Bus, as it visits locations around Northern Ireland in the lead up to COP26. 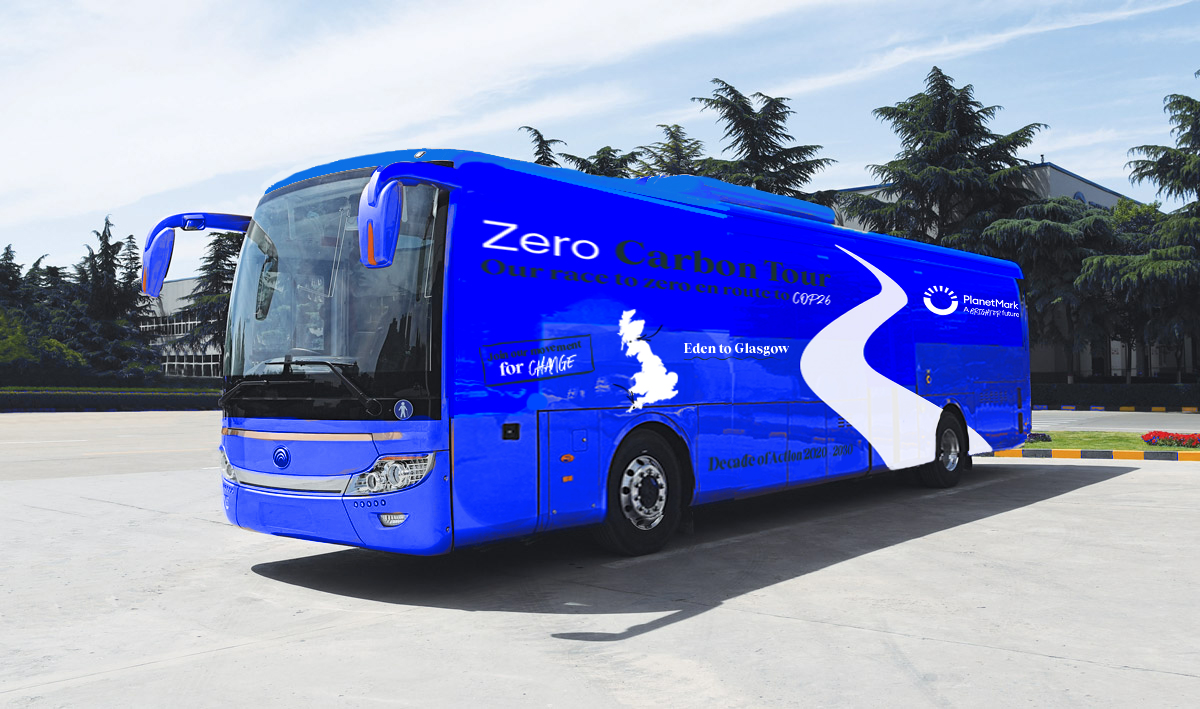 Translink has joined forces with the Northern Ireland Local Government Association and sustainability organisation Planet Mark to launch the Northern Ireland leg of the first ever UK Zero Carbon ‘battle bus’ tour.  The initiative will be offering carbon reduction workshops and practical net zero advice to businesses across NI.

With just 5 weeks to COP26, the United Nations global climate conference in Glasgow, the UK wide tour aims to enable organisations to make zero carbon pledges as part of the UN-backed #RacetoZero campaign and in line with government targets for net zero, helping them at least halve emissions by 2030.

The Zero Carbon Bus Tour was facilitated to visit Northern Ireland by NILGA, working with the UK Government Department for Department for Business, Energy and Industrial Strategy (BEIS).

Translink’s new zero emission hydrogen bus will replace the Planet Mark team’s usual electric bus for this part of the UK innovative tour, creating an opportunity to showcase the work being done to decarbonise public transport in Northern Ireland.

A tour of the Wrightbus facility will be followed by a one-to-one interview with Wrightbus Managing Director, Neil Collins and a speech from Mid and East Antrim Borough Council’s Mayor, Cllr William McCaughey on how Council is supporting the demand for a highly-skilled workforce, sustaining existing jobs through upskilling and training, and through the creation of new job opportunities within the hydrogen sector. This will be supported through the development a new Hydrogen Academy and i4C Innovation & Cleantech Centre, based in Ballymena.

Following this, Paul McCormack, Director of GenComm will address the energy sustainability challenges of NWE communities through the implementation of smart hydrogen-based energy matrixes. To round this event off, Mark Welsh from Energia which procures hydrogen for the Wrightbus fleet from their Energia Long Mountain windfarm (near Ballymena) will provide an overview of how this project is developing. Long Mountain has been chosen as the location for Energia’s ground-breaking green hydrogen production pilot, funded by Interreg North West Europe and GENCOMM (generating energy secure communities through Smart Renewable Hydrogen).

Join local hosts, Derry City and Strabane District Council as they discuss the concept of net zero carbon and why it is critical for businesses in this #DecadeOfAction. Hear Carbon Stories from like-minded local people,        organisations and community groups and the impactful projects they are undertaking to reduce their carbon                emissions. You’ll also find out more about the initiatives available in the region to support your journey to net              zero carbon.

Mid and East Antrim Borough Council will partner with a number of local businesses to demonstrate how they’re working towards becoming not only carbon-neutral within their organisation, but also supporting a low-carbon transition across Northern Ireland.
John Fullerton, Gravis Planning, representing Kilroot Energy Park, will provide an overview of the ambitious energy park development with plans to introduce solar farm, new battery storage, a hydrogen facility and CHP facility. This will be followed by Mid and East Antrim Borough Council’s Mayor, Cllr William McCaughey who will provide an overview of how Kilroot provides local jobs and supports the local economy and how Council are safeguarding the existing workforce and training a new wave, through development of a new Hydrogen Academy and i4C Innovation & Cleantech Centre in Ballymena.