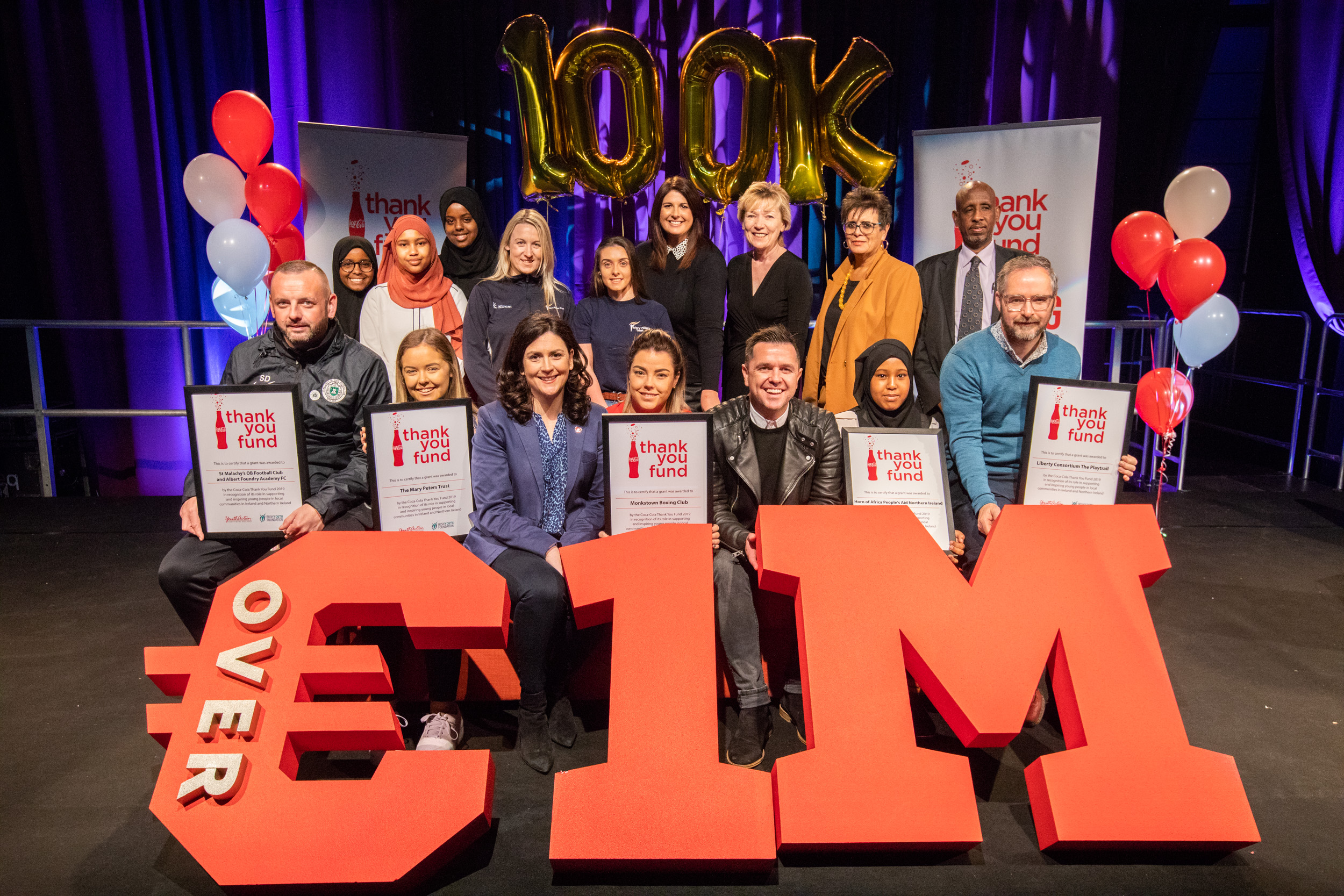 Coca-Cola has revealed this year’s Thank You Fund award recipients at Zeminar, Ireland’s largest youth conference at the National Sports Campus in Dublin. The Fund awarded a share of €40,000 to five youth organisations in Northern Ireland, from a total of €100,000 awarded to 12 community projects across Ireland.

The successful non-profit organisations were presented with their certificates during a celebration event, each receiving either €5,000 or €10,000. The money will be used to help fund innovative projects to support and inspire young people across the categories of education and training, diversity and inclusion, and innovative approaches to sustainability.

“I’ve been involved in the Coca-Cola Thank You Fund for many years and have seen first-hand the difference it makes to local community groups and the immeasurable impact it has on young people across Northern Ireland. I was delighted to get involved with the Fund again this year and it’s so rewarding to be here today to celebrate the class of 2019. One size just doesn’t fit all and by empowering these incredible local champions, the Coca-Cola Thank You Fund is giving them the tools to change the lives of young people in their community.”

Gillian Shields, Sustainability Manager, Coca-Cola HBC Ireland and Northern Ireland thanked all the organisations who applied for the Coca-Cola Thank You Fund this year, along with the judges who helped select the winners:

“We were so encouraged by the number of community leaders in towns and villages across the island of Ireland who took the time to enter this year’s Coca-Cola Thank You Fund. It has never been more important to invest in our future change leaders and the funding provided through the Thank You Fund brings projects to life that otherwise might never happen.”

“We are delighted to reach the ninth anniversary of the Fund, a significant milestone as we celebrate the donation of over €1 million to nearly 100 youth-orientated non-profit organisations across the island of Ireland since 2011. I’d like to take this opportunity to thank all those who were involved this year, as well as our distinguished panel of judges who had the almost impossible task of identifying the 2019 recipients.”

“Non-profit groups are invaluable to our local communities, so it was a great privilege for me to be part of the Coca-Cola Thank You Fund and to have the opportunity to make a real impact on the lives of young people across Ireland. Over €1 million has now been donated by the Fund to 95 youth-orientated groups right across the country, with incredible impact. While the financial support is invaluable to these groups as they work to provide vital supports and interventions at ground level, simply backing their belief can act as a catalyst for even greater change.”

For more information about the Coca-Cola Thank You Fund check out www.coca-cola.ie/thankyou