The decarbonisation of public transport in Northern Ireland has taken a significant leap forward with a new contract for 145 zero and low emission buses. 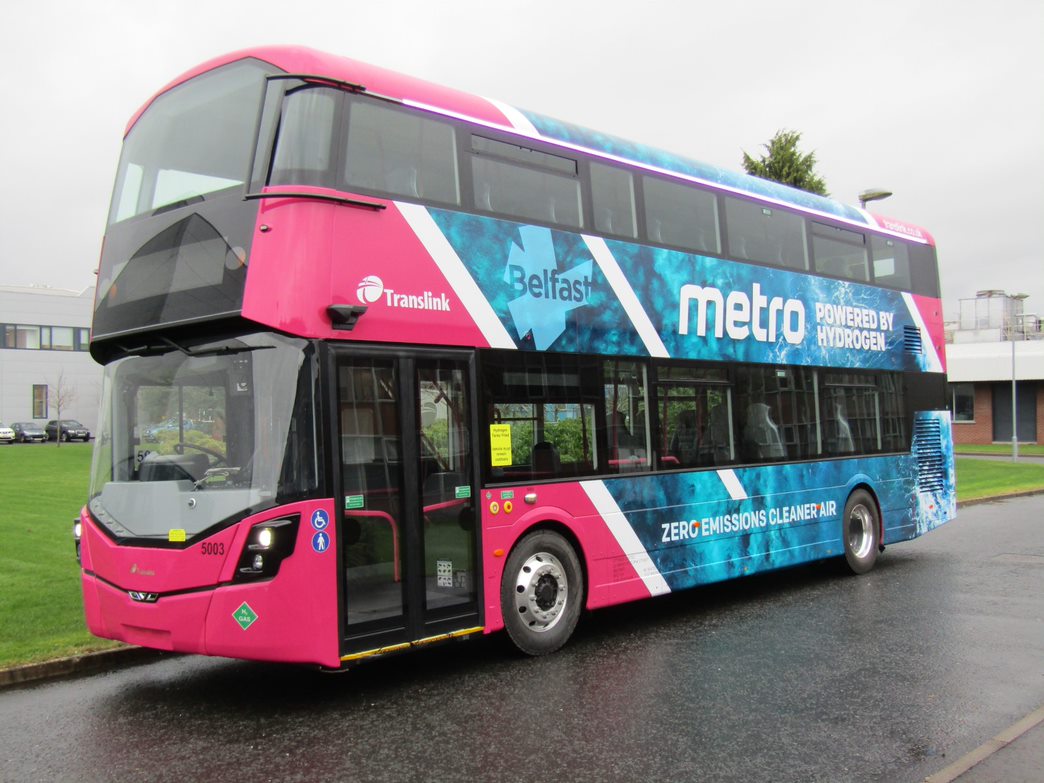 The decarbonisation of public transport in Northern Ireland has taken a significant leap forward with a new contract for 145 zero and low emission buses.

Representing an investment of around £66 million by the Department for Infrastructure, the programme will include the buses supplied by local firm Wrightbus and the associated infrastructure.

They form a key part of Translink’s Net Zero Emissions Strategy and will be fundamental in creating cleaner and greener transport to positively impact the climate emergency and air quality. Translink is also one of the Business Action on Climate Champion organisations working with others in Northern Ireland that have committed to a reduction of 30% or 50% in greenhouse gas emissions, through the Climate Action Pledge.

The 100 zero emission buses comprise 80 Battery Electric Vehicles and 20 Hydrogen Fuel Cell Electric Vehicles and will be the most environmentally-friendly buses in Ireland.  They will be deployed between Metro in Belfast and Foyle Metro services in Derry~Londonderry.  There will also be 45 low emissions buses for Ulsterbus services across Northern Ireland.

Announcing the funding Infrastructure Minister Nichola Mallon said:“Cleaner, greener, sustainable transport is key to protecting our environment and fighting the climate crisis. I have an ambitious vision for a low carbon future where we make low emission public transport accessible to people and communities across Northern Ireland.

“I have been clear since coming to office that we must act now to deliver the change that our communities and our citizens deserve.

“Following my budget announcement in June, we are now seeing the investment of almost £66 million for the purchase of  zero and low emission vehicles filter down to our local economy, with Wrightbus producing the 145 new vehicles that will enter the Translink fleet and be put into public service.

“My Department has been allocated funding of £50m from the New Decade New Approach agreement to purchase 100 zero emission public transport vehicles and I have allocated £16 million from my budget to fund the other low emission buses.

“Today marks a very positive step forward that will create jobs, encourage investment, as well as being pivotal in cutting the level of emissions.

“As well as reducing pollution, the new vehicles will have additional safety features and improved comfort and accessibility, helping to grow passenger numbers, increase overall customer satisfaction and make public transport a more attractive and efficient alternative to private cars.”

Translink Group Chief Executive Chris Conway said: “Translink is leading the transport transformation to net zero emissions, we are responding to the climate emergency and driving positive change for a healthier and more sustainable transport for future generations.

“This bus order is just the start of an exciting new era for public transport in Northern Ireland as we work to build back responsibly following Covid19. Investment in a new zero emission fleet is great news for everyone, helping tackle the global climate emergency we all face and improving local air quality.

“We have ambitious targets to operate a zero-emission public transport fleet across Northern Ireland by 2040 and this development is an important first step.  They will also deliver the highest levels of passenger comfort, convenience and accessibility

“As we progress this critical journey to net zero emissions transport, we will work with all stakeholders collaboratively to harness a shift in attitudes and behaviours towards more sustainable transport for future generations”, Chris concluded.

“Investment in hydrogen, electric and low-emission buses, and the wider energy sector, can only be good for jobs in Northern Ireland. We have the climate and the technology to drive fundamental change here and position Northern Ireland as a world-leader. This order of 145 buses is a significant step and we are proud to work alongside Translink to achieve these goals.”

The first three hydrogen-powered double decker buses ordered earlier in the year are due to enter passenger service before the end of this year. They will only emit water – no Green House Gases or other pollutants – and are the first of their kind in Ireland.