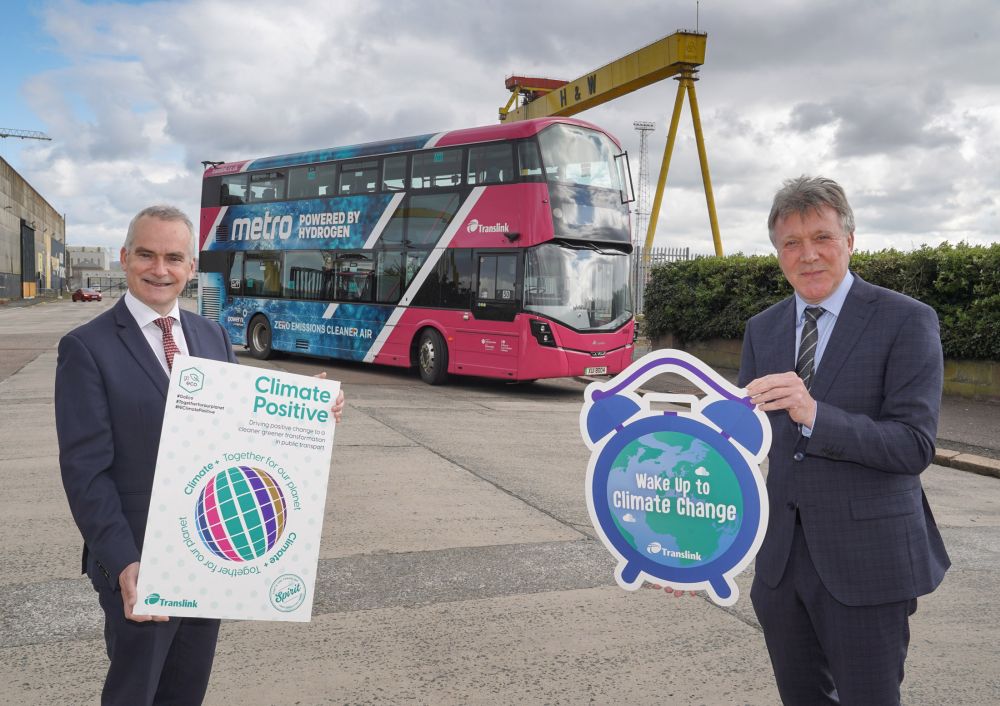 WAKE UP TO CLIMATE CHANGE: Translink has signed the BITC Climate Action Pledge NI, a public commitment to achieving an ambitious target of reducing its greenhouse gas (GHG) emissions by 50% by 2030. The pledge announcement coincides with the launch of Translink’s new Climate Positive Strategy that sets out ambitious plans to deliver a clean transport future achieving net zero emissions across the organisation’s buses, trains and buildings by 2040 ahead of government targets and then becoming Climate Positive by 2050. More local businesses are being encouraged to sign the pledge and demonstrate their climate action commitments - visit www.bitcni.org.uk/climate for details. Pictured announcing the Climate Action Pledge are l-r Translink Group Chief Executive Chris Conway and Business in the Community Northern Ireland Managing Director Kieran Harding.

The Pledge is a driver for business to take action on the climate emergency, working to ensure a liveable future and limit the increase in global temperatures well below 2°C.

By signing the Climate Action Pledge and setting and striving to achieve ambitious GHG reduction targets, Northern Ireland organisations can demonstrate their commitment and willingness to collaborate to address this critical issue.

Chris Conway, Group Chief Executive, Translink, said: “Our pledge announcement coincides with the launch of our new Climate Positive Strategy that sets out our ambitious plans to deliver a clean transport future achieving net zero emissions across our buses, trains and buildings by 2040.

“Our journey will not end there as we aim to go beyond Net Zero and become Climate Positive by 2050, removing additional harmful carbon dioxide and NOX to clean the air we breathe while also incentivizing the use of public transport as a greener, healthier, smarter lifestyle choice.

“As we emerge from Covid-19 the business sector has a real opportunity to reset, join forces and tackle the global climate crisis for a green recovery – we hope more local organisations will sign this Pledge and take action now to secure a brighter sustainable future,” said Chris.

Kieran Harding, Managing Director, BITC, said: “Signing the Climate Action Pledge is an act of public accountability that proves to an organisation’s stakeholders, customers and employees that they are taking ambitious action on the climate crisis.

“To make a real difference, businesses need to collaborate and act now. We are delighted that Translink has joined our growing group of Northern Ireland organisations that have made a public declaration to take action urgently.”

Translink has also recently retained its top Platinum status in the NI Environmental Benchmarking Survey which assesses the extent to which organisations have embedded environmental business practices within corporate strategies and operations.

The Translink Youth Forum is the co-signatory and witness to this BITC Climate Action Pledge and will be provided with an annual update on progress towards delivering targets as well as being given the opportunity to provide advice and challenges to shape Translink’s climate action plans.

It’s time! Businesses called to Build Back Responsibly, but how?