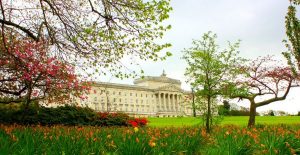 The Assembly sits in Parliament Buildings, Ballymiscaw, Stormont, in Belfast. Members of the Legislative Assembly (MLAs) meet to debate issues, question Ministers, and consider and make laws for the benefit of people in Northern Ireland.

What Northern Ireland Assembly did

The Northern Ireland Assembly strives to be an exemplar organisation in respect of Sustainable Development and biodiversity. The Parliament buildings and surrounding estate are home to various government departments, including the Department of Finance and Personnel’s Estate Management Unit (DFP EMU), which maintains the 407 acre estate which is open to the public all year round.

Recognising the importance of its conversation of local wildlife, the Northern Ireland Assembly developed its Sustainable Development Policy which has four key themes: Governance for Sustainable Development; Sustainable Communities; Sustainable consumption; and natural resource protection and climate and energy change. Several initiatives have been adopted to improve biodiversity including additional planting in car parks to encourage wildlife; swift boxes on the roof; bird boxes at the security huts; plants in offices and courtyards; and wildflowers distributed to staff to encourage them to improve biodiversity at home.

Working in partnership with DFP EMU and the RSPB Northern Ireland, the NI Assembly aims to construct four Giant Bird Tables within the grounds of Stormont. These Giant Bird Tables will help provide food for birds and other wildlife, as well as promoting biodiversity on the grounds and helping staff and visitors to understand the wildlife around them.

The outcomes and impacts

To find out more, email christine.watts@niassembly.gov.uk